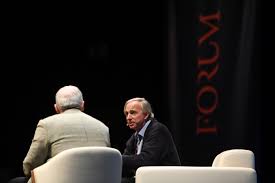 The co-chief investment officer of the world’s largest hedge fund expects China to emerge as a potential contender for the world’s financial centre in the wake of the COVID-19 pandemic.

In an interview with Financial Times Bridgewater founder Ray Dalio said that 2020 was a “defining year” for China’s financial markets, with the country’s advance economic recovery resulting in 1 trillion yuan of investment inflows.

Dalio expects the sheer size of the Chinese economy and its international clout to potentially make it the world’s biggest financial centre.

“China already has the world’s second largest capital markets, and I think they will eventually vie for having the world’s financial centre,” said Dalio.

“Throughout history, the largest trading counties evolved into having the global financial centre and the global reserve currency.”

Dalio compared China’s economic rise to the shifts in imperial power seen repeatedly throughout the course of human history.

“When you see the transition from one empire to another, from the Dutch to the British to the American, to me it just looks like that all over again,” said Dalio.

Bridgewater operates an onshore, renminbi-denominated version of its All Weather China Fund, which has around USD$300 million under management and posted a return of 24.6% in 2020.

Dalio said that in future China would eventually account for a “very meaningful” part of Bridgewater’s assets under management, which currently total around $150 billion.

As a result of the impacts of the COVID-19 pandemic a number of economists have brought forward their forecasts for when the Chinese economy will surpass that of the US in nominal terms, with some expecting this turning point to arrive as early as 2028.

As a consequence some advisors have called for investors to raise their Chinese portfolio allocations to around 20%.